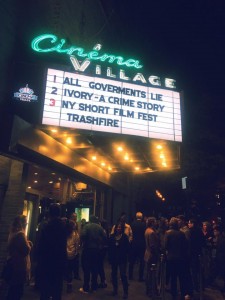 Celebrate the very best of international short filmmaking with us at the New York Short Film Festival. The Festival is a week of screenings in Manhattan’s vibrant Greenwich Village, providing ample opportunities for short filmmakers to showcase their achievements, learn from fellow filmmakers, and build contacts for future collaborations.

Here is the screening schedule for the 2017 NYSFF

Block 1: Friday Nov 3 at 6:30pm (75 minutes)
Cyclone: 90 Years Of History On Wheels by Frank Posillico
Danceforce40+ by Malene Schjoenning
Life & Sand by Simon Mendes
Sound Is Half The Picture by Dede Maitre
Sunnyside by Bobby Cassidy
Loss by Jayne Nicoletti

Block 2: Friday Nov 3 at 8pm (75 minutes)
Another After Hours by Jim Lively
Bardo: by Derek Cote
Group Therapy (For _____) by Bradly Dever Treadaway
In Traverse by Daniel Yankiver, Danielle Kipnis & Katie Wiegman
Kisses by Ron Dubren
Man Man by Matthew Dipple
Carbs by Taryn Brooke
Troubled Waters by Peter Meng
How I Cheated My Girl On Her Birthday (and Almost Got Away With It) by Neem Basha

Special event: “How to Get your Feature Film Made” with Rob Margolies
Saturday Nov 4 at 4:30pm
60 minute lecture followed by 30 minute Q&A
Free with purchase to any screening at the festival

Block 4: Saturday Nov 4 at 6:30pm  (75 minutes)
A Tree. A Rock. A Cloud. by Karen Allen
Addicted by Michael Scarnati
August In The City by Christie Conochalla
I Hate When It Gets Dark So Early by Edward Pomerantz

Block 6: Saturday Nov 4 at 9:45pm  (75 minutes)
Back Page Ripper by Stephen Rutterford
Beneath by Lindsay Serrano
Happy Birthday, Brenda by Rory Douglas Abel
Let It Die by Matthew Forte
Seventeen by Joey Stamp
The Son, The Father… by Lukas Hassel

Block 14: Tuesday Nov 7 at 8pm (75 minutes)
Oompa by Kingnyne
Early Mourning by Ben Hartley
Your Thirty Second Birthday by Phil Engsberg
Rivers by Graciela Cassel
Getting Over by Michele Lyman
Step Into The Light by Jeffrey Basinger
Near Change by André Sogliuzzo

Block 15: Tuesday Nov 7 at 9:30 (75 minutes)
Limits by Aitor Mendilibar
Nomadic by Akram Shibly
My Name Is Somebody by Orges Bakalli
H by Kelly Stoker
The Cycle by Benjamin Zhang, Dewi Tan

Block 19: Thursday Nov 9 at 6:30pm (75 minutes)
Dear Father by Richard Louissaint
The Fire Next Time… by Jonathan I Jackson
The Forgotten Ones by Mantai Chow
The Human Face by Aline Pimentel
The Tables by Jon Bunning
Terraza 7 by Carlos Freire

Closing Night Party Thursday Nov 9, 7pm – 2am
This year’s party will be at The Skinny in the Lower East Side.
If you’d like to attend the Closing Night Party, please see Noel or a
member of our festival team during the festival, and they’ll sell you
a party admission wristband for $5, which will also entitle you to
special drink prices at The Skinny.  Filmmakers and guests are welcome at
the party, as long as they have a wristband. Wristbands can also be
purchased at the door for $8.